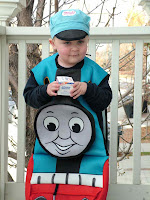 Stacy & Julian left this morning for Palo Alto so Julian could receive his final Zenapax infusion. He'll receive that tomorrow after his quarterly visit with the docs in clinic. On Friday, they'll to Phoenix (Gilbert) where they'll stay for the winter. I'm driving down to meet them this weekend, then fly back to Colorado on Monday. After that, I'll resume my commuting schedule between Denver & Phoenix.

Julian is doing well. He's just now at the tail end of his head cold, and it's reassuring to know that his body is capable of recovering from a cold while on immune suppression.

The picture is of Julian in his Thomas the Tank Engine costume. There's also a new video on YouTube of Julian as he addresses the very serious issue of Thomas's nasal gastric (n.g.) feeding tube.  Enjoy.

David
Posted by David J Phillips at 11:31 AM