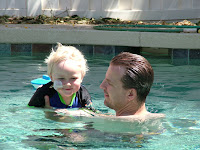 It's been two weeks since the biopsy, and Julian is doing great! In fact, today we can finally remove any behavioral restrictions, which is a relief, because it's darn near impossible to keep someone with this much energy from jumping up and down and running around. Julian has been a good sport though, so we rewarded him with a dip in the pool outside. We had a ball, as you can tall from the look on his face.

We also changed the NG tube today, which Julian was not very happy about. However, it does mean we were able to get a few pics of him sans tube, which is always nice.

It's remarkable how quickly he's growing. If you go back and look at pictures taken around the time of the transplant, he's really quite small. But Julian went from 25 lb. to 45 lb. in the span of 12 months. He's much taller as well. He used to be considerably smaller than other kids his own age; now he's as big or bigger. Fulfilling his genetic potential, as it were - I think that's how the docs in Palo Alto put it. Grow Julian Grow.

Check out the additional pics in the photo album. Have a good night, and thanks for checking in.