Julian woke up this morning a bona fide five-year-old. He's quite pleased with himself, and already making plans for what he'll do when he turns 6. It's amazing watching little ones grow up. It seems to happen in big steps, like certain things falling into place or a switch is turned on, and one day he wakes up with the wit to negotiate for extended bed-times, make plans for the future, and crack jokes all on his own. It's so much fun being Julian's parent! 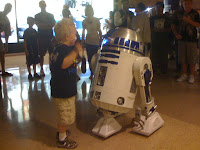 One of the things Julian has become acquainted with this year is Star Wars! In particular, he likes any scene where R2D2 (pronounced "oo-dee-doo-dee") is present. We were quite pleased to find out a couple weeks ago that Hopekids.org had tickets for us to go see Star Wars On Stage, a spectacular hi-def multi-media arena show, complete with live orchestra playing the iconic Star Wars themes, and narrated live (!) by Anthony Daniels, the gentleman who played C3PO in the saga. What a show! But the highlight had to be when we were roaming the halls, and who should we bump into? Oo-dee-doo-dee! What a thrill! Turns out Oo-dee-doo-dee is as big as Julian, and was as happy to see Julian as Julian was to see him, spinning and rolling around, and looking Julian in the eye! Wish we had it on video. 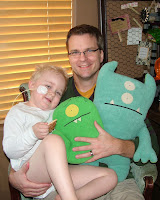 We're laying low today, and will have a small, family celebration this weekend. Julian has received some very thoughtful packages from family members near and far, and we'll enjoy opening those this weekend. One of the things that has become something of a birthday tradition for us is these crazy "ugly dolls" (that's really what they're called), and we've taken to giving Julian one every birthday (starting when he turned 1). This year he got 2 new friends - 3 if you consider the big one in the picture is actually 2-sided (named "bop & beep"). We let Julian open those as soon as they arrived in the mail, and as you can see, they've bonded well already.