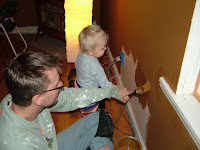 Hello everyone. We wanted to express our thanks to those of you who have made donations toward Julian's care. COTA doesn't tell us who donated or how much - rules are rules - but we submitted our first round of expenses last week, and they did tell us that the current account balance was within a couple hundred dollars of the total we submitted. So, suffice it to say, the need is being met.
A point of clarification though - someone asked if they could still donate, or if it was only something they could do at Christmas. Rest assured, as long as that little "Donate" tab is still at the top of this page, you can still make a donation. And yes, we are still in need of assistance - some of our most expensive costs have yet to be incurred. To wit, we haven't actually had the transplant yet.
So, thanks again to those of you who have made contributions, as well as to those of you still considering the possibility.
Julian is doing really well. Since he was sick over the New Year's holiday, we've taken a different approach to his medication/supplementation and his personal nutrition. Basically, we're changing the way we feed him and how we give him his meds. The results seem to be very good - he's actually hungry (!) and asking for food (!!!) on a regular basis. He's gaining weight and has plenty of energy for running around and laughing. He's so much fun to be with!
We have an appointment on the 24th of this month, when we'll get to see what effect his new food/med routine is having on his blood chemistry. Our hope is that we can forestall dialysis altogether, and wait until an organ becomes available. The dialysis catheter is still in - we've decided not to pull it for the time being. We'll keep it in as a back-up, in case we have to try dialysis again in the event that his kidneys decline further before an organ becomes available for transplant. We want to subject him to as few surgeries as possible, and the last thing we want is to have to put it back in later because we decided to pull it now.
That's the news for now - time to get ready for work. Thanks for checking in.
Posted by David J Phillips at 10:06 AM