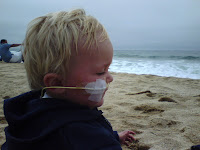 After our time at the "speakers" we loaded up the van and headed off to Half Moon Bay in search of "surfers and wabes." The beach at Half Moon Bay was a little crowded, so we headed up to Montara State Beach. We had a peaceful time walking up and down the beach in our bare feet, and although we didn't see any surfers, the wabes were quite dramatic. And we did stop and watch a game of beach volleyball ("bolly-ball") for a while before heading back.

Now, Stacy has been fighting off what we hoped was some kind of allergic reaction for most of the weekend. Today, however, after hitting it with Benadryl and Claritin, she continued to drain. We're left with the conclusion that she in fact has a head cold. As such, we checked her into a hotel for the night, and I'm staying here with Julian at the Donald House, delaying this week's return to Colorado by at least a day. Bummer for everyone - especially Stacy.

Donald House policy is that if someone in the room gets sick, that person (or the whole family - our option) has to move out (to a hotel in our case) until they're better. That's seriously inconvenient as it involves moving all your stuff out of the room so another family can have it. However, even more serious in our case, is the potential of Julian catching whatever it is Stacy is fighting, and possibly pushing his protocol biopsy out even further. As it stands, we think we may be on our way home in as little as 3 weeks, assuming the biopsy goes well on September 5th. The prospect of pushing that date out any further in the event of Julian getting sick is not one we wish to entertain.

So, I'll be here for one more night than originally planned, and Stacy and I will reevaluate in the morning. If she's feeling better, great - I'll fly back to Colorado on Monday. If not though, I could be here longer. Please pray that whatever Stacy is fighting clears up quickly.

David
Posted by David J Phillips at 6:15 AM