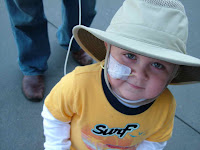 We went out for a day of touristing up at our happy place at the ferry terminal and along the waterfront between the terminal and our parking lot south of the Bay Bridge. Julian seems to do best when he's moving around - walking, running - as opposed to remaining strapped into his stroller, so we had him walking most of the time. Well, touristing is hard work, so he fell asleep in the van on the way back to Palo Alto. I carried him upstairs, and he's asleep in his crib as I write this. He seems to be sleeping soundly - no coughing. Thank you Lord

While we were having lunch, our post-transplant coordinator called to let us know that Julian's protocol biopsy has been rescheduled until September 5th - two weeks out. If all goes to plan, Julian will have his biopsy, and if everything looks good, the docs will probably release us the following week. That means we'll probably be leaving Palo Alto on or around the 12th.

So that's our hope - that whatever is bogging Julian down right now will clear up in the next few days, and he'll be back to his bright & sunny self well in advance of the biopsy. Then, we're praying that everything checks out for the follow-up, and we can go home. Please pray with us to this end.

David
Posted by David J Phillips at 6:10 AM