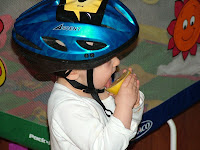 Stacy and I were at a party last night with a bunch of old friends and co-workers, some of which I hadn't seen in a couple of years. Everyone was asking about Julian, and it occurred to me that we haven't posted an update in a while. So here goes.

We had an appointment with Julian's kidney doctors a couple of weeks ago, and everyone is in agreement now that Julian is big enough for a transplant. There are several ways to do it, and some of the doctors had concerns about limiting future modes of treatment if the transplant was performed a certain way. That hurdle has now been cleared, so we're officially on to the next step.

Now we're in the process of getting Julian on "the list." That process involves a considerable amount of testing and paperwork involving us, the hospital, Julian's PCP, and the insurance company - yikes! Getting all these people to talk to each other sometimes seems like a Herculean task, so we've got our hands full. Stacy especially is busy chasing everybody around, making sure everything gets filed and scheduled appropriately.

Julian is waking up from his nap, and Stacy is at the grocery store, so it sounds like it's playtime!
Posted by David J Phillips at 3:57 PM